Comic of the Month 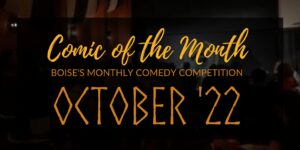 COMIC OF THE MONTH – Boise’s monthly comedy competition
5 local comics compete for the chance to win a $100 prize and the title of COMIC OF THE MONTH .
Judges critique and score each set and audience votes for their favorites to crown the champion!
Winner and runner-up will be entered to compete for the grand title of Comic of the Year in the month long competition in January ’23. Winner takes home the grand prize of $1,000 and much much more!
———————–
Doors @ 7PM – Show @ 7:30PM
Online: $15 ; Door: $20
———————–
OCTOBER’S LINE UP:
Host: Tyson Gusman
Your Judges: Beth Norton, Krystal Moore and Reese Samuels
Your Competitors: Ian Owens, Bree Jones, Sara Raffaella, Greg Sisco and Aaron Weimiller