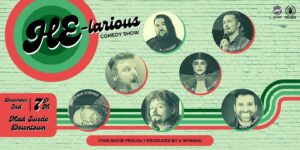 This is the last HE-larious comedy show of the year. The producer packed this lineup with some of their favorite fellas from all around Boise. Sit down and enjoy some male introspection, or more likely… a night full of d*ck jokes. Either way it’s going to be merry and bright because this show is proudly produced by a woman (gasp).
The Dudes:
Kris Sharma
Merl
Big Gay Paycen
B.J. Hurry
Matthew Vorhies
Niko Lukoff
Tyson Gusman
Hosted by girly-person: Bree Jones
—-
Show Info
Tickets $20
Doors open at 6:30
Stay afterward for Karaoke
—-
From the producer: HE-larious History
Boise is a neat place for comedy. We are lucky as female comedians because so much of the scene in the Treasure Valley is run by badass, powerful women. We needed to give the Bros a chance in this city- mostly so they would stop whining. But as someone who loves men, I wanted to show they can be more than one thing (just like us ladies can be). So I pick my comics for each HE-larious show to be from all walks of life. Different races, sizes, sexual preferences. Some are married. Some are fathers. Some are not.
Plus I want to profit from THEM for a change [insert evil laugh here]. That’s right, I will only pay the men on this show 70% of what they are worth.