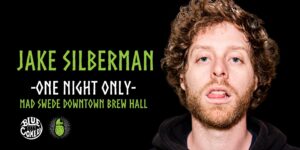 We have THE JAKE SILBERMAN traveling through Boise and you don’t want to miss him!
Support LIVE comedy and artists working their craft.
Blue City Comedy presents…
JAKE SILBERMAN @ MAD SWEDE DOWNTOWN BREW-HALL
————————–
$10 Online; $15 at the door
Wednesday Show:
-Doors at 7 Show at 8
MEET YOUR HEADLINER:
JAKE SILBERMAN is a New York City comedian who’s been relentlessly touring the country over the last two years. He’s headlined numerous clubs, including Helium Comedy, Savage Henry and The Lincoln Lodge. Jake has opened for some of the biggest names in comedy, including Kyle Kinane, Nate Bargatze and the late Norm Macdonald. His special “The Crowd Work Album” is currently streaming on Tubi, with the album version put out by Helium Comedy Records. His recently released documentary “Back at It” chronicles the return of stand up comedy after the pandemic, following Jake as he tours the country while interviewing comics and fellow Americans along the way. Jake’s work has been featured on “Now This News” and you can hear his weekly podcast “The Jake Silberman Show” every Friday.
————————————————-
Mad Swede Downtown Brew Hall is bringing you award winning beer and autumnal hard seltzers. Have you tried their hop water yet!?! Swedish meatballs, hand pies and the most delicious beer dogs!
Come have dinner and a show – EVERY WEEKEND @ Mad Swede Downtown !
Savor the voyage.
———————-
Wanna be in the Comedy Loop?
Follow The Blue City on FB and IG and Eventbrite at @BlueCityComedy
– Supporting artists working their craft –
Generate iCal